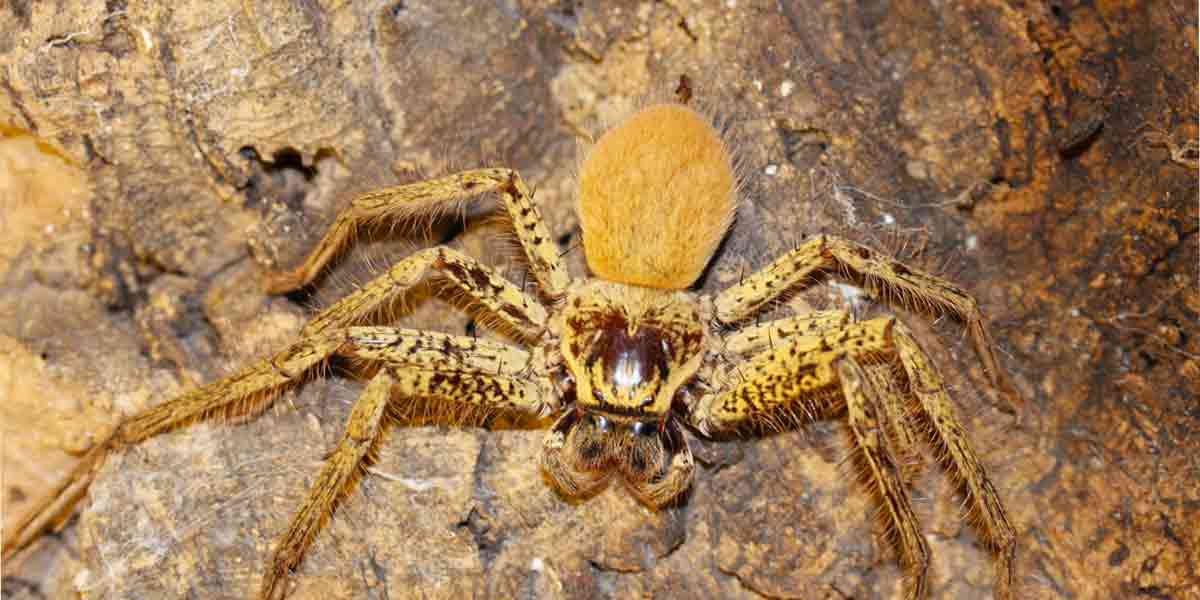 Sparassidae spiders are particularly well-known for their giant size and mode of hunting. Giant huntsman spiders can bite humans by provoking them, but their bites are not known to be dangerous to humans(although they can be quite painful and have other side effects).

Giant huntsman spiders are large compared to other spiders, being the largest spiders type belonging to the Sparassidae spider family. The Giant Hunstman spider’s body length is about 4.6 cm (1.8 inches), while its legs span is 30 cm (12 inches) long. The female spiders are characteristically larger than their male counterparts.

Giant Huntsman spiders have a yellowish-brown body color. These spiders also contain dark spots distributed irregularly all over its body. Their legs have brown and grey markings.

Adult Giant huntsman spiders do not build web but they rather hunt their prey.

Aside from the fact being giant, huntsman spiders are also fast and agile. Their ability to run and their size can be enough to instill even the bravest hearts with fear, but their speed also makes them master predators. Instead of preparing a web trap, huntsman spiders prefer jumping and stalking their prey. Their speed, agility through their lateral legs, and large, powerful size help them catch their prey, mainly large insects like crickets.

The average lifespan of a giant huntsman spider would be around 2-3 years or more.

Giant Huntsman Spiders live under loose bark on trees, crevices on rock walls and logs, under rocks and slabs of bark on the ground, and foliage.

Giant huntsman spiders like to eat insects, geckos and small skinks. They are food of birds and wasps.

Giant huntsman spiders found in Laos, as well as other parts of Asia, Australia, Africa and parts of united states like Texas, Florida, and California.

Does Giant Huntsman Spiders Bite and If They’re Poisonous?